NWSP 80.3 includes data and analysis from a study of two types of blotter paper, including the paper used for AATCC TM42. Only the density and manufacturer of the other tested paper were provided; density is the same as currently specified in NWSP 80.3. The conclusion of the study was that “density, absorbency and rate of absorbency are very important factors when selecting a blotter paper.”

According to the note associated with the study results, AATCC blotter paper is less absorbent with a slower absorbent rate and higher test results. The higher results are attributed to paper density (0.53 g/cm3 for AATCC; 0.24 g/cm3 for the other paper.) It is unclear how higher density leads to higher test results (results are the mass increase of the paper due to water passing through the test specimen). In any case, consistently lower results suggest that water passing through the test specimen is being absorbed by the back side of the fabric, or even running off the paper, rather than being absorbed by the blotter paper. For many end uses, this may represent a false pass.

While the available data suggests that the AATCC blotter paper is better suited to the impact penetration test, it should not be used for AAMI classification unless noted as a modification. Note that blotter paper specifications are not included in AATCC test methods, but a certificate of analysis indicates the properties of each lot.

Although ANSI/AAMI PB70:2012 indicates that “WSP 80.3 is equivalent to and may be substituted for AATCC 42 when the blotter paper specified in 5.2.1.2 is used,” there are additional differences between the current versions of these test methods.

In most cases, the differences are very minor. Hole, specimen, and blotter size are functionally the same, varying due to conversion and rationalization of units. The integrated blade on the inside of the funnel provided by AATCC serves the same purpose as the additional baffle indicated in NWSP 80.3. If such a blade exists, use of an additional baffle will not affect test results. Some equipment manufacturers may produce impact penetration testers without the integrated blade; in this case, the NWSP baffle or other device should be used to prevent swirling. The requirement to prevent swirling motion as water is poured though the funnel is included in both AATCC and NWSP test methods. 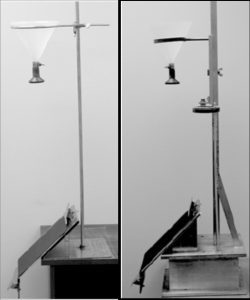 The NWSP method calls for greater accuracy than the AATCC method. Mass is measured and recorded to 0.01 g rather than 0.1 g. As noted in the previous section, NWSP blotter paper results in much lower values, so the increased accuracy may be relevant for comparing similar products. Most pass/fail decisions can be determined using measurements with 0.1 g accuracy, regardless of the blotter paper used.

AATCC TM42 is first published. The test method references AATCC Textile Blotting Paper but does not include detailed specifications for the paper. AATCC TM35 and AATCC TM70 are published in 1947 and 1952, respectively, with similar references to blotter paper. The official blotter paper is sold by AATCC; properties are defined by internal quality control procedures and reported to customers on certificates of conformity.

The manufacturer of AATCC blotting paper could no longer provide the specified material. AATCC contacted several other potential manufacturers.

Based on manufacturer specifications, a close alternate paper was proposed for further study.

The AATCC RA63 chair sent a letter to committee members informing them that the proposed blotter paper provides “statistically comparable data and is therefore considered an approved replacement.”

Remaining stock of the “old” blotter paper was depleted and replaced by “new” paper.

First edition of ANSI/AAMI PB70, Liquid barrier performance and classification of protective apparel and drapes intended for use in health care facilities, was published.

ANSI/AAMI PB70 was revised. According to the annex, “The most significant revision to PB70 involves two water-impact resistance tests: AATCC 42 and the newer WSP 80.3, which has more stringent specifications for blotter paper and equipment calibration.”

Alternate blotter paper is specified for use with AATCC TM42:

There were no significant technical changes in the revision. Standard designation was changed from WSP (Worldwide Strategic Partners) to NWSP (Nonwovens Standard Procedures). Note 3, regarding source of blotter paper was also updated.

The blotter paper specification was updated in this revision. Mass per unit area was significantly increased (from 90 g/m² to 139 g/m²).

EDANA published an online note dated August 9, 2018 indicating that changes were intended to resolve ambiguities concerning the use of blotter paper; however, the online summary does not match the blotter paper specifications in the standard. The specifications in NWSP 80.3.R1 are also slightly different from those published in ANSI/AAMI PB70:2012.