Exploring the Oldest Fabrics in Existence

Exploring the Oldest Fabrics in Existence 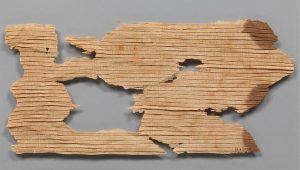 Some of the oldest excavated fabrics have been traced back to civilizations that existed thousands of years ago. The oldest clothing item recorded is the linen Tarkhan dress from Egypt’s first Dynasty approximately 5,000 years ago. Pants found in a Chinese tomb were made 3,000 years ago, while a 1,700-year-old sock was fished out of a landfill during an archeological expedition in the Egyptian city of Antinoopolis.

The oldest existing fibers for textiles were dated 34,000 years back, but these are just fibers, not whole clothing. The George Washington Museum of Textiles display pre-Hispanic Peruvian fabrics dating between 900 and 600 BCE (Before Common Era), while the Brooklyn Museum of Art boasts the Paracas Textile, a nearly 2,000 year old richly colored cloth from the south coast of Peru. How were these fabrics preserved for so long and can our modern fabrics compare?

According to Carol James, a renowned textile author, “Industries looking for particular qualities of rigidity and stretch can find structures fitting their needs by looking at ancient textile structures.” The durability of ancient fabrics can be tied to the materials they are made of. Linen, made from fibers of the flax plant, has been used by ancient civilizations all over the world. Many fabrics excavated from ancient Egyptian civilizations were made of linen materials and it remains one of the most durable materials, hence its popular use today. 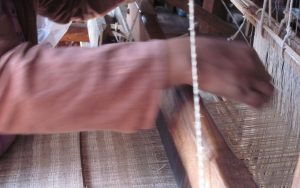 Another strong material that remains popular today is silk, “The Queen of Textiles.” The Chinese closely guarded the secrets of their silk production for millennia, with the oldest piece of silk cloth found in China dating to approximately 3630 BCE. Ancient Myanmar (formerly Burma) was well-renowned for its use of silk and silk weaving remains one of the main professions in the country.

It is not just the materials used for making the textiles that allow such a long preservation period. In fact, organic materials degrade very quickly. According to Sumru Belger Krody, Senior Curator of the George Washington University Museum and The Textile Museum, “Ancient fabrics are mainly preserved by specific environmental conditions. These include dry desert conditions, places like bogs where there is no oxygen, or permafrost where the fabrics are frozen. This would explain why the 600-year old bra found under the floorboards of an Austrian medieval castle was not as well-preserved, while the smallest detail on the Paracas Textile was kept perfectly intact by the dry sands of the Peruvian coast.

In Norfolk, England, a group of women are working to restore a 400-year-old large linen tapestry. These ancient fabrics are often extremely fragile and must be handled with exceptional care to preserve their value. The Smithsonian Museum Conservation Institute in Maryland outlines various care routines for these ancient fabrics but emphasizes that they should only be handled by textile conservators. In some cases, such as the Norfolk tapestry, efforts can be made to restore an ancient fabric to its original form.

In terms of the materials used in modern day fabrics, they include many of the same materials as ancient fabrics, such as plant-based cotton and linen and animal-based wool and silk. There is also now a vast array of artificial fibers such as polyester, nylon, rayon, and spandex. Some of these materials are made to be durable and long-lasting. However, it is the manufacturing practices of these fabrics that have seen the biggest change.

The manufacturing of modern-day textiles builds upon ancient weaving practices, with the addition of technology. As Deborah Deacon, of the Arizona State University School of Art, points out, “There are now knitting machines and various types of looms for both home and industrial use.”

Artisan fabric making seems to be the closest practice to that of ancient times, as artisan fabric makers often make use of weaving and spinning techniques that are passed down through the generations. Thus, they are frequently able to recreate the highly twisted threads found in ancient garments. 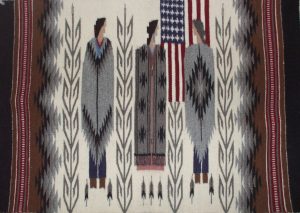 James believes the industrialization of the textile industry has its downsides, however. “The industrial method for spinning fibers into thread results in thread that is less durable than in pre-industrialized times,” she says. However, Deacon also points out that, “Artisan fabric making cannot keep up with the world’s demand for fabrics.” She uses the Navajo maiden corn rug and traditional American coverlet pictured below to illustrate. “Depending on the size, it can take several months to weave a Navajo rug on an upright loom, and the same goes for a coverlet, which is woven on a traditional loom.”

The amount of time and effort placed into hand-producing fabrics leads to increased cost, which is why artisan products are overshadowed by cheaper mass-produced materials. As a result, artisan fabric making is often limited to personalized work and restoration projects. There is hope for artisans in the mainstream industry though since in a world of ever-changing fashion trends, interest in artisan fabrics is growing.

The 21st century is an era of fast fashion, where garments displayed on catwalks are mass-produced quickly to meet consumer demands. Since modern fashion is continually evolving, many of these garments are rapidly discarded as the next trend commences. As a result, today’s manufacturers produce everyday clothes with speed, rather than quality, in mind. In fact, toxic chemicals, dangerous dyes, and synthetic fabrics are the recognizable hallmarks of fast fashion. Synthetic materials such as polyester are not biodegradable and may last for many years in whatever condition they are kept. However, they release plastic fiber fragments into the environment, which can build up in animal tissues.

To catch a glimpse of some of the historic hand-made clothing practices still alive in different cultures today, one can explore the Peruvian technique of discontinuous warp, nalbinding in Scandinavia, Assisi embroidery in Italy, shiny indigo dyeing in China, and Akwete weaving in Nigeria.

Historic Fabrics of the Future

Fabrics made with the organic materials of ancient times have primarily survived because of specific environmental conditions, and the same concept will apply to our modern clothing. Hand-made fabrics remain more durable than machine-manufactured fabrics, although synthetic materials biodegrade more slowly and therefore will last longer than organic-based fabrics. Historic hand-made, artisanal fabric and clothing techniques are still practiced today, and these one-of-a-kind garments and other textile products are still available for the discerning shopper who doesn’t mind paying extra for the human touch.